Skip to content
Baby´s health
February 27, 2018 admin asthma attack, asthma in babies, asthma: what to do?

Asthma in babies: what it is, symptoms and treatment

Asthma is a chronic respiratory disease that is very common in children, and it can also appear in babies and infants. Discover everything you need to know about her.

Asthma is not a respiratory condition that affects only children, young people, and adults. Did you know that babies can also suffer? It is, as we shall see below, a chronic inflammatory disease of the respiratory tract, characterized by repeated episodes of bronchial obstruction.

In fact, although it is a respiratory disease that many people suffer in adulthood, there are occasions when it is diagnosed also at very young ages; So early, that childhood asthma can be diagnosed even shortly after the baby is born, depending on the symptoms you have.

In any case, it is considered that the baby is asthmatic when a child, less than 2 years old, suffers more than two acute respiratory symptoms in which wheezing, dyspnea and/or cough are heard.

What is the bronchial soul and why does it appear in the baby?
Asthma is a condition that affects the baby’s lungs. It basically consists of an inflammatory disease of both the lungs and the respiratory tract, which is characterized by being chronic.

As you surely know, the airways are the ducts that carry air to the lungs. When there is asthma, the baby’s airways tend to become irritated and inflamed, which can severely affect his ability to breathe normally.

For this reason, it is so important to know what are the symptoms of asthma attacks in the baby, to prevent and/or treat them quickly. In fact, did you know that with proper medical treatment and a specific action plan for asthma, most asthmatic children can make a virtually normal life, without major problems?

What are your causes? Why does it appear?
It is believed that respiratory allergies can be a direct cause of asthma since it is estimated that about 80% of children with asthma also have allergies. For example, allergies to dust mites, animal dander or mold.

There are also other causes that can influence the triggering of symptoms and subsequent illness. For example, viral infections, air pollutants such as cigarette smoke, and cold, damp air.

All these triggers are not a direct cause, but rather tend to make the baby’s asthma worse. Therefore, the following factors should be avoided:

Humid and cold climates.
Cigarette smoke.
Substances that cause allergic reactions.
Medications such as aspirin or ibuprofen
In addition, pet hair can worsen babies’ asthma, since dandruff present on their skin tends to be a direct trigger. However, in this regard, extreme caution should be exercised.

In fact, it is common for babies to have bronchiolitis in their first infancy, consisting of a viral infection that causes obstruction of the thinnest branches of the bronchi (the bronchioles) due to inflammation of the bronchi. internal layers of them.

What are the symptoms of asthma in babies?
The baby’s airways, when he has asthma, tend to become narrower, so he will have difficulty both inhaling and expelling air from the lungs. Wheezing is common, consisting of a kind of whistling and high-pitched sound during breathing.

A dry cough may also occur, especially in acute episodes, and it is common for sibilants to be heard again at the end of each coughing attack. Attached to a certain degree of choking (dyspnea). 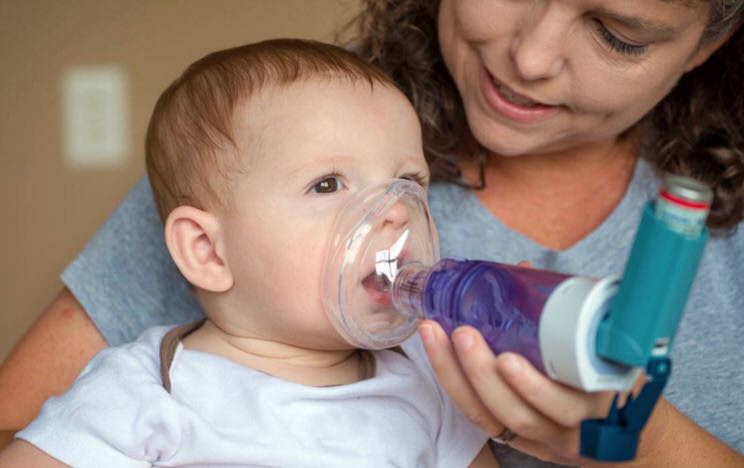 How is it treated?
When the child is so small, the most common medical treatment – inhaled bronchodilators – tends to be less effective, which is why it is common for steroid anti-inflammatory drugs to be used at first.

However, the key is to discover what factor is triggering asthma attacks in the baby, so that it may be possible to develop a prevention strategy to help avoid them. For example, if the trigger is humidity and cold climates, it may be necessary to move and move to a warmer area.

What to do in case of an asthma attack? How to stop it?
There are known medicines known as a quick relief that is used to stop asthma attacks, as they are able to facilitate breathing by relieving spasms of the respiratory tract. They are known as inhaled bronchodilators.

In this sense, for example, it is common albuterol (in its most recognized brand, salbutamol), which is administered by an inhaler or a nebulizer. While the inhaler is a small aerosol accompanied by a mask, so that the child inhales the medication when breathing through it, the nebulizer is a device that converts the liquid medication into vapor, which is also aspirated through of a mask.

Heat stroke in babies and children: how to prevent it, what to do and how to act

The first baby juices when to start?